Tales from the Dodger Dugout by Carl Erskine 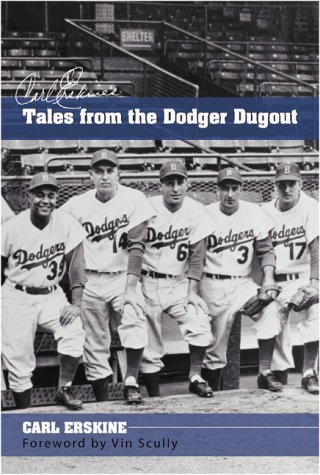 In this book, Carl Erskine tells 175 anecdotes about his teammates, rival players, managers, and even one about a Dodger batboy.  He reminisces about the Yankee-Dodger rivalry, the Dodger-Giants rivalry, and about his teammates' acceptance of Jackie Robinson as the first black baseball player in the Major Leagues.
Not all the tales were from the Dodger dugout.  One of them in particular came from the Polo Grounds bullpen on a rather memorable day for New York Giants fans.  It was the ninth inning of the final game of the 1951 playoff series, and the Dodgers had a two-run lead.  But the Giants had two men on base, and the potential winning run coming up to bat in the form of Bobby Thompson.  Carl Erskine and Ralph Branca were warming up in the Polo Grounds bullpen for the Dodgers, and Charlie Dressen, the Dodger manager, called to see if his relievers were ready.  "They're both ready," said Clyde Sukeforth, the bullpen coach; "However, Erskine is bouncing his overhead curve."  So Dressen called for Branca.  The rest is history.  As for Erskine, whenever he was asked what his best pitch was, he would say, "The curveball I bounced in the Polo Grounds bullpen!"