A Mother's Reckoning: Living in the Aftermath of Tragedy by Sue Klebold 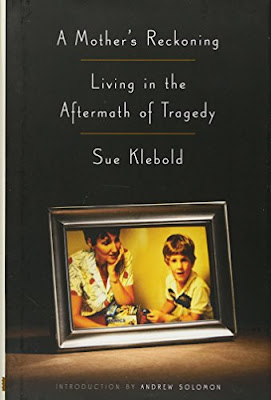 I read and reviewed this book over three years ago, but somehow never posted it to my Contemplations of MoiBibliomaniac blog until now....


This book was the May 2016 nonfiction pick for a local book club my wife and I belonged to. It was written by the mother of one of the Columbine High School shooters. I read this book in April 2016. Only four months earlier, right after the San Bernardino shooting, I had read Gone Boy, written by a father whose son was murdered in a school shooting in Massachusetts in 1992. That book was a page turner; but I found that I was unable, for the longest time, to write a review of the book. It was just too uncomfortable a subject for me. A Mother's Reckoning: Living in the Aftermath of Tragedy, on the other hand, was a harder read, not because of the circumstances of the shooting, but because it seemed that Sue Klebold kept apologizing for her son's actions.

Sue Klebold bares her soul in documenting the before and after of the Columbine shooting. She divides the book into two parts, the first of which she is still in denial, and the second in which she begins to understand how her son became a killer. The other shooter, Eric Harris, wanted to kill people. While her son Dylan wanted to take his own life. Dylan's parents were unaware of his depressed state of mind. Both sets of parents were unaware of their sons' preparations for the shooting. What surprised me was that Eric had seen a psychiatrist and was on medication while both he and Dylan were attending a Diversion Program in lieu of jail after being arrested for theft 15 months prior to the shooting.

Looking back, Sue Klebold saw signs that her son was in trouble emotionally. But she did not notice them at the time. Another thing that somehow stayed below the radar was a school paper that her son wrote about a man dressed in black who kills the popular kids at school. The teacher did mention at a parent's conference that she was disturbed with the subject of the paper and referred it to the guidance counselor, but said the matter was under control. Sue Klebold asked her son to show her the paper, and he said he would that night. He didn't and the matter was forgotten. I mention this because bullying was a factor in the shooting. Sue Klebold believed that the arrest, the paper, and her son's mental state, when combined together, might have given cause for a threat assessment of her son by authorities.

There was a lively discussion of this book at our local book club. We came away with the opinion that it could have happened to any parent. But that every parent needs to be on the lookout for signs of mental or emotional problems of their children.
Posted by Jerry Morris at 6:32 PM No comments: