A Scout's Report: My 70 Years in Baseball
by George Genovese with Dan Taylor.
Reviewed by Jerry Morris 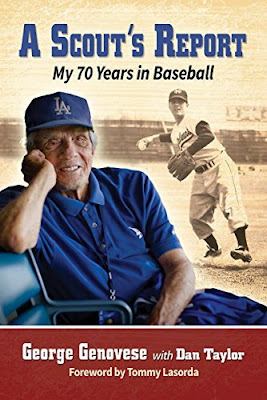 This book, A Scout's Report:  My 70 Years in Baseball, is one of the better ones.  From Page 1 to page 244,  you will witness George Genovese reliving and breathing baseball, first as a player, then as a manger, but mostly as a baseball scout.  44 of the players George Genovese signed became major leaguers and, when you read his book, you will find out which ones went on to become stars.
Posted by Jerry Morris at 11:30 AM No comments:

Gone Boy: A Walkabout
A Father's Search for the Truth in His Son's Murder
by Gregory Gibson
Reviewed by Jerry Morris

It was in early December, right after the San Bernardino shooting, that a Facebook friend of mine posted a comment about the need for gun control.   One of the people who responded to the post was Gregory Gibson, an antiquarian bookseller who wrote a book about his own son's murder–a mass shooting at Simon's Rock College, Great Barrington, Massachusetts on December  14, 1992.

I ordered a copy of his book on the 5th of December, and it arrived a few days later.  Now I have read true crime books where the writers investigate the murder and the murderer, and while I can't say that I enjoy reading them, I do find them to be interesting reading. But to read a book written by a father about his own son's murder—that was something I didn't know if I was prepared for.

Read it, I did, over the holidays.  But review it, I could not.  I was at a loss for words.  What do I say about a father who writes a book about losing his son to gun violence?  Good book? Compelling reading?  It would take months before I wrote this review.

Gregory Gibson wanted to know the "how" and the "why" of his son's murder.  He attended the trial.  And afterwards, he investigated the murder on his own: How, when and where the murderer, a student at Simon's Rock College, obtained the murder weapon, an SKS Chinese Type 56 Carbine, which accepted a thirty-round magazine.  How the killer modified the gun.  What the killer did on the day of the murder. The actions and inactions of the officials at Simon's Rock College on the day of the murder concerning the killer's receipt of his mail order ammunition.

Gregory Gibson went so far as to interview the court psychiatrists, the witnesses to the shooting, the shooter's parents, and the shooter himself.  He researched the history of the manufacture, importation, and modification of the murder weapon itself–the killer modified the gun and replaced the ten-round magazine with a thirty-round magazine.  This magazine did not lock into place, causing the gun to jam.  If not, there would have been more victims than there were.

Seemingly, Gregory Gibson looked into anything and everything pertaining to his son's murder to try to understand and answer one question: Why?

In his chapter concerning the killer's gun, Gibson wrote about the guns that were made back when the Second Amendment was written. Back then, it would take a marksman two minutes to load and fire four or five rounds.  Nowadays, a shooter can empty a thirty-round magazine in the blink of an eye.   Gibson concludes the chapter with these words:


The 'arms' that the founding fathers thought about keeping and bearing didn't need defining in 1800.

On the eve of the twenty-third anniversary of his son's murder, on the Timeline of his Facebook page, and on his Bookman's Log,  Gregory Gibson posted some questions for Wayne LaPierre and the NRA: 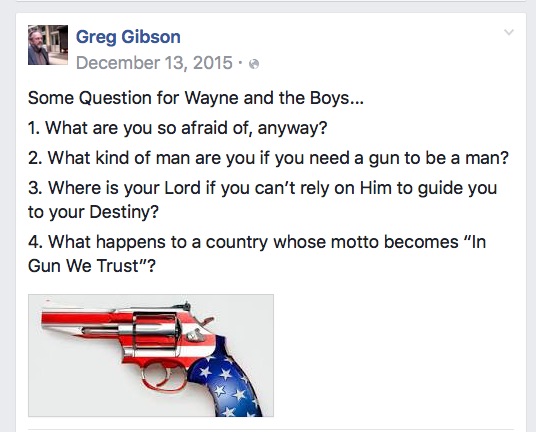 America needs to respond to that last question.  And now.

Posted by Jerry Morris at 5:52 PM No comments: