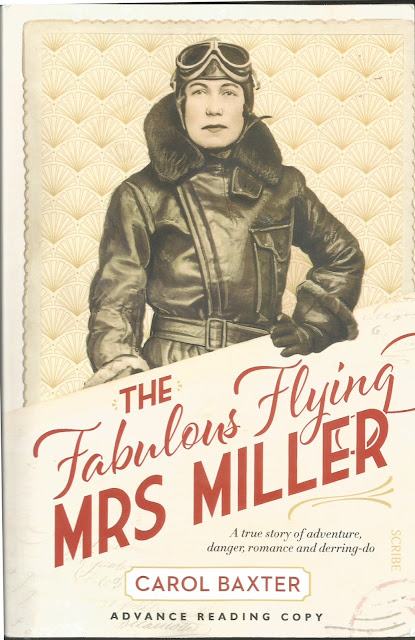 I am slowly forming my second Sentimental Airman Collection.  So when I saw The Fabulous Flying Mrs Miller listed in the February batch of Early Reviewer books on Library Thing, I requested it, won it, and received my copy in March.
This book is about an Australian woman, Mrs Chubbie Miller, who meets a Royal Air Force Reservist, William "Bill" Newton Lancaster at a party in London in the late 1920s. He intends to be the first aviator to fly a light aircraft from Great Britain to Australia, but lacks the funds required for the trip.  Chubbie offers to help pay for the trip if she can fly as a passenger with him to Australia.  The trip is fraught with bad weather and mishaps, and another aviator becomes the first to complete the trip from Great Britain to Australia.  Chubbie, however, becomes the first woman to fly as a passenger from Great Britain to Australia.
After spending a few months flying around in Australia, Chubbie and Bill decide to try their luck in America.  Chubbie learns to fly, and enters women's cross-country derby races, making a name for herself.
The Great Depression happens and jobs are scarce.  Chubbie is hired to fly from Pittsburgh to Havana and back again.  The purpose of the her trip was to promote Pittsburgh as an air centre.  The weather deteriorates rapidly after Chubbie departs from Havana, and Chubbie never reaches Miami.  Search planes are sent out but no one can find her.  On the fourth day, everyone learns she is still alive.  Chubbie over-accounted for the strong winds of the storm that were pulling her off course.  Instead of running out of fuel over the Gulf, she ran out of fuel and landed in a remote marsh in Andros Island, Bahamas.
In the last third of the book, Chubbie becomes involved in a love triangle in Miami.  While Bill is out of state looking for work, Chubbie has a romantic tryst with her ghostwriter, and then tells Bill of her ongoing affair in a letter.  Bill, still in love with Chubbie, rushes back to Miami and the ghostwriter dies that very night.  Bill either kills him or the ghostwriter commits suicide by gun.  The book now becomes a murder mystery with Bill on trial for murder and Chubbie as one of the witnesses.  And here is where I stop, because you will enjoy reading the true tale the author weaves of how the trial plays out.

Posted by Jerry Morris at 5:42 PM No comments: