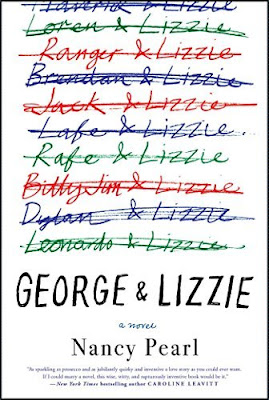 Nancy Pearl, originally a librarian by trade, has written a number of nonfiction books that help people decide what to read.  And she is the host of a television show,  Book Lust with Nancy Pearl, where she interviews writers, and discusses their books with them. Now she has written her own novel.  And it is not about the life of a librarian.  Not even close!
By the looks of the front cover,  you might think that the book is about a woman who had a whole lot of boyfriends.  But you would be wrong.  Lizzie, the main character in the book had only one true love in her life.  And he left her and never came back.
The name of her true love is one of the names on the front cover of the book.  But it isn't George.  George was just the name of the guy that she married.
As for Maverick, Loren, Ranger, and all but one of the others, they were members of Lizzie's high school football team.  They were part of the Great Game Lizzie played during her senior year in high school, a game she replayed in her mind for years on end....

Posted by Jerry Morris at 10:01 AM No comments: