A Second Book of Booksellers:
Conversations with the Antiquarian Book Trade
by Sheila Markham.
Reviewed by Jerry Morris

I don't claim to be a connoisseur of books about books. But I am a collector of them, having over 1000 books about books in my library. And I enjoy reading and writing about them in my blogs. I also love recommending the very good ones. And Sheila Markham's book, A Second Book of Booksellers:  Conversations with the Antiquarian Book Trade, is second to none. 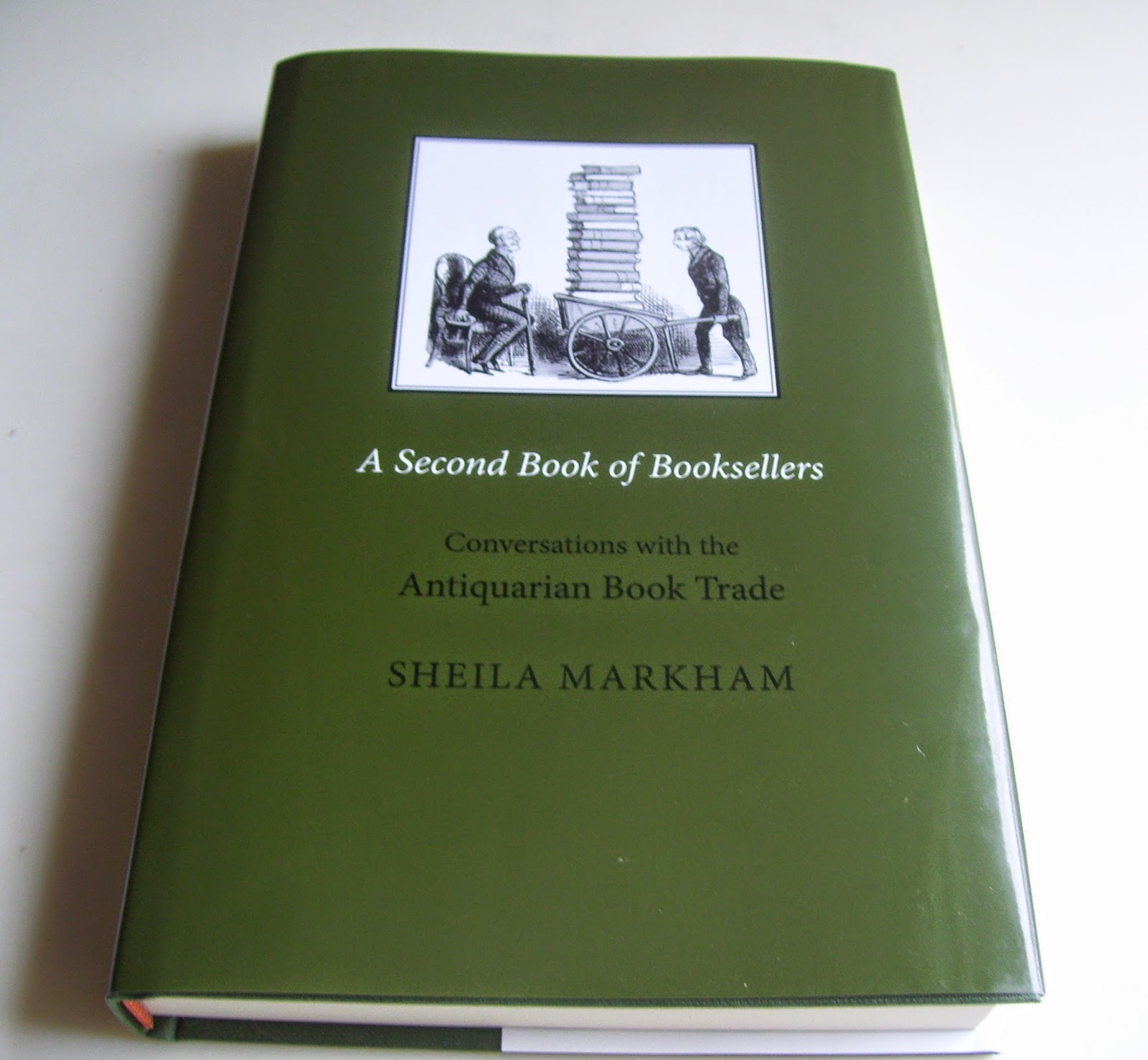 If the title sounds familiar, it's because A Second Book of Booksellers is a sequel  to Sheila Markham's first book, A Book of Booksellers:  Conversations with the Antiquarian Book Trade,  first published in 2004 and reprinted in 2007. 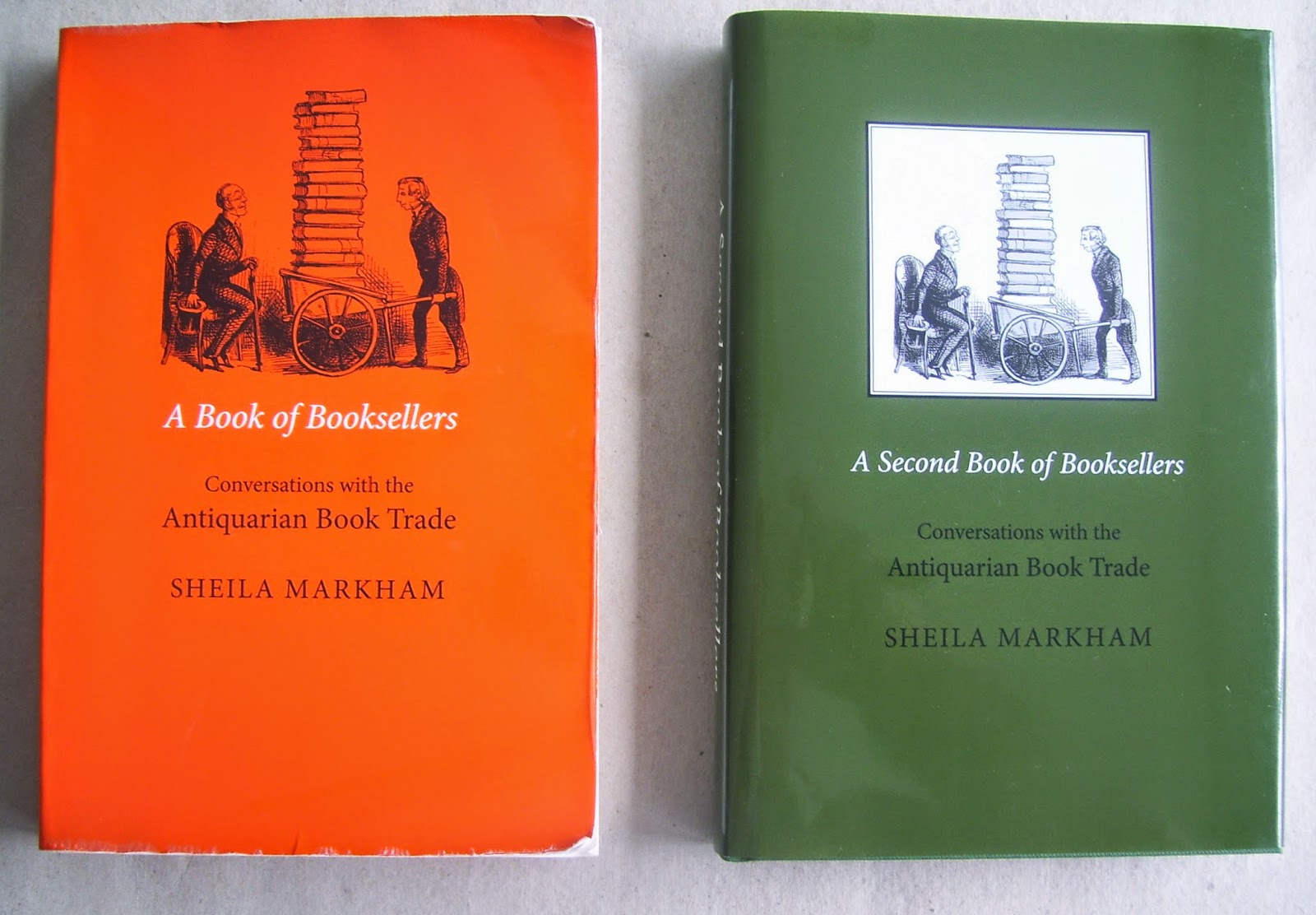 Most of the booksellers interviewed in the two books are English, with two Americans and at least one Canadian also interviewed.   One of the English booksellers interviewed in the first book started his career with a book stall in the Portobello Road Market and ended up on Bond Street.   Another bookseller found Winston Churchill's manuscript notes for his World War II books on Portobello Road, yet kept his own military books in the basement of his bookstore with the rats.  One bookseller in the second book spent twenty years amassing the greatest Charles Darwin Collection ever.  Another bookseller was blind.  But that did not prevent him from buying and selling books — I love the title of that interview: "A Feeling for Books."  What I found most fascinating about all the interviews is that I learned first hand, from the horse's mouth,  so to speak, what effect the internet has had on the book trade in the last twenty years.  I like the viewpoint of one bookseller who said, "I cannot imagine a time when one of my clients will start to tremble and perspire holding in his hands a first electronic version of Don Quijote de la Mancha.  Rare and beautiful books will disappear only if beauty itself disappears from our existence."

Now I enjoyed reading both books.   And I recommend you buy both of them.  But don't just take my word for it.  Go to her website, Sheila-Markham.com, and click on "The Interviews."  While there, you can read over forty interviews online that were not printed in her two books.  By then, you will want to read more.  But I would not wait too long. . . .

A Second Book of Booksellers  is available from either Amazon.co.uk or from Sheila Markham's website. And Sheila says PayPal is fine!

Great post and great idea for every country with rare & antique bookdealers.
Collecting (old) books is so much fun and it is always a pleasure to read from other collectors worldwide about their finds, passions and disappointments! I myself wrote some guest editorials for The Private Library and the ILAB to improve my languagues skills (I am Dutch)(http://perkamentus.blogspot.nl/p/english-book-corner.html). Anyway my own little collection 'Books about Books' is growing every day, mainly English (now about 500 books).