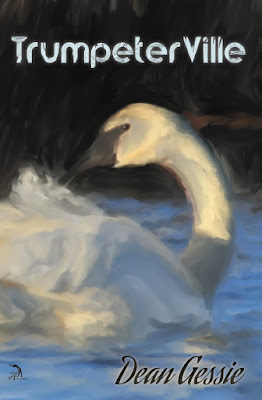 TrumpeterVille is animal allegory in the tradition of Animal Farm by George Orwell.  The story reflects American political culture before and during the presidency of Donald Trump.

Overview by Amazon.com, Barnes and Noble, and Alibris

TrumpeterVille might be called animal allegory but it doesn't hold a candle to George Orwell's Animal Farm.  It is pure nonsense.  But it did get a laugh or two from me because of the author's selection of names and terms he used in this story.

President Lulu:  the first black knob elected as the leader of Swanville, whose signature accomplishment was the Swan Care Act, also known as Lulu Care.

Trumpeter or the Trumpeter:  his campaign slogan was Make Swanville Great Again!  He boasted that his beak was waaaaaaay bigger than yours.  And so were his feet!  He was going to replace Lulu Care with something terrific.  It was going to be wonderful!   And he was going to drain the swamp.  He honked day and night using one hundred and forty windpipe vocalizations.

Madam Secretary, also called One Percenter and Madam Status Quo.  Trumpeters wanted to put her on a barbecue spit because of her purported crimes.   imPALE Her!  imPale Her! imPALE Her! That's what they yelled at Trumpeter rallies.

Bunion:  Trumpeter's Chief Political Adviser who helped him drain the left-wing swamp and convert it to a right-wing swamp.

Cinnamon:  Trumpeter's Press Secretary who got along great with WHITE BARK NEWS and ROCKS NEWS, but had hissy fits with USS News.

Throw in such terms as the White Loaf Rebellion, the War on Error, the Russian Swan Affair, Bewick Swans, and overwhelming evidence of lake to lake collusion and you have the recent sad state of the American Political scenery presented as a satire.

Both the Political Right and the Political Left are ridiculed in this story.  The sad thing is that you're going to think that half of it is true.  It just depends on whose side you're on.