Countdown 1945: The Extraordinary Story of the Atomic Bomb and the 116 Days That Changed the World by Chris Wallace 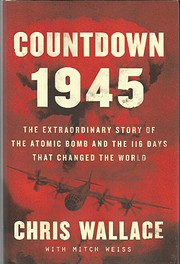 Countdown 1945:  The Extraordinary Story of the Atomic Bomb and the 116 Days That Changed The World by Chris Wallace, New York: Avid Reader Press, 2020.

This month, August 2020, marks the 75th anniversary of the atomic bombing of Hiroshima.  Scholars and moralists are still arguing about whether President Harry S. Truman made the right decision.  Chris Wallace pulls no punches in detailing what went on in the 116 days leading up to August 6, 1945, the day the United States dropped the atomic bomb on Hiroshima.

There are three primary characters in Countdown 1945:

President Harry S. Truman, who made the decision to drop the bomb on Hiroshima.

Col. Paul W. Tibbets, who commanded the 509th Composite Group, the unit charged with developing a method to deliver an atomic bomb on either Germany or Japan.  Tibbets was the pilot of  the Enola Gay, the name of the B-29 superfortress that dropped the bomb on Hiroshima.

Throughout the book, Wallace paints human portraits of other members of the flight crew of the Enola Gay:  the copilot; Theodore Van Kirk,  the navigator; Jacob Besar, the radar countermeasures officer; and George Caron, tail gunner.

Wallace brilliantly includes several other characters in Countdown 1945 to enhance the human side of the story:

Ruth Sisson, a cubicle operator of one of the 1152 calutrons at Oak Ridge, Tennessee. Calutrons were machines used to enrich uranium.  Ruth's fiancé was a medic in the U. S. Army; she was afraid he would not survive the war;

Draper Kaufman, the leader of the Navy's Underwater Demolition Teams.  Kaufman/s demolition teams were responsible for removing underwater obstacles, including mines, stakes and bombs, prior to the launching of amphibious beach assaults.

Hideko Tamura,  a Japanese school child who returned to Hiroshima the day before the bomb was dropped.