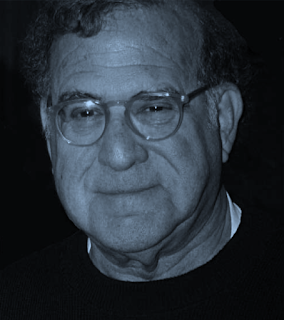 There are literally hundreds of people, many of them bibliophiles, who called Paul Ruxin their friend.  He was a member of the Caxton Club, the Rowfant Club, and the Grolier Club.  And he was the guest speaker for many of the other bibliophilic societies in the United States, including the Florida Bibliophile Society.  His death has shocked us all.

I posted a notice of Paul Ruxin's death on the Facebook page of the Florida Bibliophile Society.  And I included an anecdote of how I first made his acquaintance in September 2004.  For those FBS members who didn't read my Facebook post, I will repeat the anecdote below.  And I will add a few more anecdotes to show the kind of man my friend Paul Ruxin was.


In September 2004, Lee Harrer, a member of both the Florida Bibliophile Society and the Caxton Club, gave me a copy of the latest issue of The Caxtonian, which contained an article by Paul Ruxin titled, "Other People's Books: Association Copies and Another Pleasure of Collecting." Lee knew I'd be interested in reading the article because I, too, collected association copies.

I wrote Mr. Ruxin, introduced myself, and said I collected association copies and Samuel Johnson—but on a mailman's salary (Paul Ruxin was a partner in the prestigious Jones Day Law Firm). I told Paul that I was about to buy a copy of his book, Friday Lunch, because I was going to begin giving talks before the Florida Bibliophile Society, and hoped to learn a thing or two by reading the talks he gave before the Rowfant Club during lunch on Fridays.

Paul promptly responded and wanted to know where I had found a copy of his book. He said he was looking for copies to give to some of his friends. I gave Paul the bookseller's contact information and told him to buy it for one of his friends because at $75 it was really too rich for me. And I thought that was the end of the matter.

I decided to take the day off from delivering the mail the following Friday and was just sitting down to have lunch when my mailman came to my door with a package for me. It was a copy of Friday Lunch. And inside was this gift card: 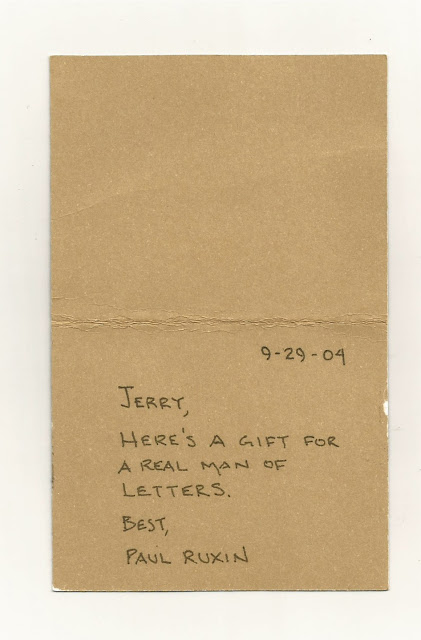 I "surprised" Paul Ruxin a few months later.  One of the twelve talks published in Friday Lunch was about the poet and playwright Archibald MacLeish.   I had just read MacLeish's essay "The Reorganization of the Library of Congress 1939-44, " in the 1945 Annual Report of the Librarian of Congress, and when I found an offprint of the article on AbeBooks, I thought Paul would enjoy reading it.  I ordered it, and had it sent directly to Paul Ruxin's place of residence in Chicago.

Paul received the pamphlet but he didn't know who to thank!  There was nothing on the invoice that identified who bought the pamphlet for him.  So Paul called this friend and that friend,  and yet another friend—Paul had lots of friends—but, thus far, no friend admitted to sending him the pamphlet.  About two weeks later, I emailed Paul and asked if he received the pamphlet I sent him.  And he replied, "SO YOU'RE THE ONE!!"

Chicago was cold and windy in 2005, and Paul accepted my invitation to be the guest speaker for the March meeting of the Florida Bibliophile Society.  He planned on spending a week or so just soaking up the warm Florida sun after he gave his talk to us.  "Soft-Hearted Sam" was the title Paul had selected for his talk.  A day or two before the meeting, however, Paul contacted me and said he had to change his plans.  He would fly in the day before the meeting; but he had to fly back to Chicago right after the meeting was over that Sunday. And that's what happened.  Afterwards, I learned that Paul had been in the middle of negotiating the sale of an oil company, and had to get back to Chicago to resume negotiations on Monday.  To me, that said a lot about what the word, commitment, meant to Paul Ruxin.

I had invited Paul to brunch at my house before the FBS meeting in March 2005.  We spent more than a few minutes beforehand in my library, mostly in front of the shelves containing the books formerly owned by Donald and Mary Hyde.  Paul remarked to my wife that I was lucky to have an entire room for my books.  He said that all his wife let him have was one small alcove for all of his books!

I had the opportunity to visit that "small alcove" in March 2011.  I was in Chicago for the Caxton Club's Book-Launch Party to celebrate the publication of Other People's Books:  Association Copies and the Stories They Tell.  Both Paul and I had contributed essays which were published in the book.  As for Paul's alcove, after seeing it, and fondling handling some of his books on the shelves, I regarded it as a great alcove!  There were books formerly owned by Samuel Johnson, James Boswell, and their contemporaries—all of them looking down and out over Chicago. At thirty-eight floors up, Paul's Great Alcove of Books was the closest I have ever been to book heaven!

I last heard from Paul on March 21st of this year.  I had sent him the link to my recent blog post, "The Story of Spence's Anecdotes." And after reading it, Paul replied, "Fascinating as usual... thanks."

To you Paul, I say with all my heart,  "Thanks for being my friend."