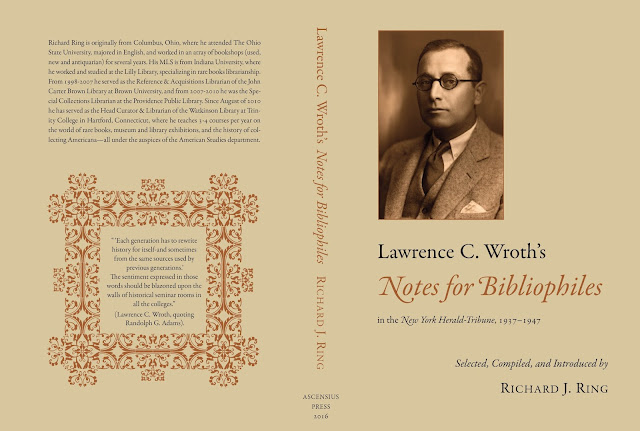 I regard myself as quite knowledgeable about bibliophiles and bibliophilic matters.  But I learned a thing or two from reading this book.  I learned more about the bibliophiles I thought I already knew:  Wilberforce Eames, Douglas McMurtrie,  and A. S. W. Rosenbach, to name a few.  And I was introduced to a bibliophilic topic I knew practically next-to-nothing about: maps.  Richard Ring selected articles by Lawrence Wroth about mapping the Northwest Territory as well as the maps of the Pacific Battleground, where American troops were currently fighting.

And I particularly enjoyed reading Wroth's pieces about the American libraries, their exhibitions, and some of their special collections.  And Ring included pieces on American newspaper bibliography, printing, and even on early American handwriting.

What amazed me most about the book, however, was the depth of knowledge Wroth displayed about the location of copies of particular books and maps in the libraries of the world. And, I should note, Wroth had no computer on which to look up the bibliographical information he provided in "Notes for Bibliophiles."

Richard Ring has done well in his selection of the 59 articles from the more than 225 articles that appeared in the New York Herald Tribune Books.