THE SEVEN:
The Lives and Legacies of the Founding Fathers of the Irish Republic
by Ruth Dudley Edwards
Reviewed by Jerry Morris 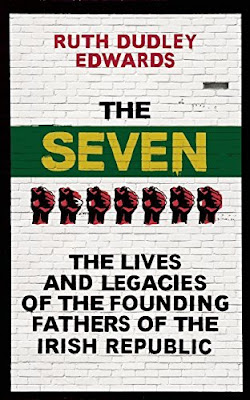 This is one of them books where there are two sides to the fence.  If you're Irish and damn proud of it, The Seven who led the Easter Rising in 1916 are heroes.  If you're English, then these seven men were traitors.

Now I'm Irish and proud of my heritage; but what disturbs me is that The Seven collaborated with the Germans, and sought Germany's help in their rebellion against England.  Since America was fighting against Germany, the patriotic lines become blurred. And I personally can't see The Seven as the patriotic heroes that many Irish men and women regard them to be.

Ruth Dudley Edwards lays it all out matter of factly: the individual backgrounds of The Seven, their parts in the Easter rising and their legacies.  An interesting read.
Posted by Jerry Morris at 11:31 AM