Boswell's Books:
Four Generations of Collecting and Collectors
by Terry Seymour
and commented upon by Jerry Morris 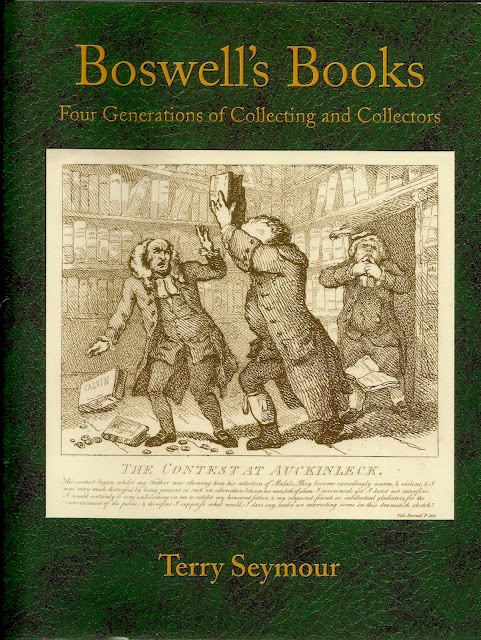 Yes, that's Samuel Johnson raising a folio above his head in the cover photo above.  But that's not the bookseller Thomas Osborne who is about to be bashed.  It is Lord Auchinleck.  And that is James Boswell himself cringing in the background.  The etching, "The Contest at Auchinleck," and part of Rowlandson's 1786 Picturesque Beauties of Boswell, offers a contemporary view of the Auchinleck Library.

The Boswell Cataloguing Team began cataloging the Boswell Library in October 2008.  And we completed our cataloguing in August 2012. But in June 2013,  thanks to an article by Terry Seymour in the March 2013 issue of the Johnsonian News Letter, "An Appendix to Boswell's Books," I was recataloguing the 1810 Catalogue of Greek & Latin Classics in the Auchinleck Library; I was adding eleven items  I had somehow missed two years earlier.

Terry Seymour began his Boswell project sometime in 2009. And his book was published in April 2016.  I received my copy on April 20th.  Terry said I was the first collector to receive an ordered copy.  I had volunteered beforehand to be a reviewer (to get a free copy), but Terry believed–and rightfully so–that my name and the name of Library Thing were mentioned too many times in his book for me to write a fair and impartial review.  What I can do, however, is tell you a little bit about both cataloguing projects.

The purpose of the Library Thing Catalogue of James Boswell was to provide online access to the individual listings of books formerly owned by James Boswell and his family.

The purpose of Boswell's Books, as stated by the author, "is to present a complete picture of the known history of each book, from the time it entered the Boswell family library until the present day."

The 1810 Catalogue contained Greek and Latin books that Sandy Boswell inherited from his father, and Sandy was the cataloguer.  James Boswell himself was the cataloguer of what I cite as the "Circe 1770 Catalogue."  Terry Seymour cites it as the "JB Handlist" c1771.  The 1916 sale contained items that were not listed in the 1893 auction.  The auctioneers of the 1917 sale combined remainders from the Auchinleck library with items from other libraries.

Terry Seymour's catalogue, Boswell's Books, contains not only the books, but also the manuscripts that are listed in the above catalogues, but with one exception.  The 1825 Catalogue contained a number of Jamie Boswell's books that were formerly owned by Edmond Malone.   And Terry Seymour catalogued only those "books that have a direct bearing on their Boswell owners."

Terry Seymour referenced a number of additional sources when he catalogued the books and manuscripts listed in Boswell's Books:  Margaret Montgomerie Boswell's Inventory of the Auchinleck Library 1783-1785,  Sandy Boswell's Catalogue of the Manuscripts at Auchinleck 1808-1809, fragments of Sandy Boswell's Catalogue of the Auchinleck Library 1803-1810,  the Walpole Galleries Sale of 1920, and the 1976 Family Sale.  Terry Seymour also listed presentation copies given by the Boswells to their friends.

Margaret Montgomerie Boswell was James Boswell's wife.  And shortly after Lord Auchinleck's death, she catalogued the books and manuscripts as they appeared on the shelves in the Auchinleck Library, identifying the books by the titles on their spines.  The first part of the catalogue, however, is missing.

Sandy Boswell's catalogue of the manuscripts identified 89 manuscripts in the Auchinleck Library.  Terry thinks it is likely that this catalogue was intended to be part of Sandy's General Catalogue, of which no complete copy exists.

Terry Seymour says that the 1920 Walpole Sale included more books with Boswell ownership marks than any other source.  And the identity of the prior owner remains unknown, and also how the owner acquired the books.  Of the 400 lots listed in this sale, only 12 lots appear in any other source.  As for the 1976 sale, Terry Seymour notes only two books of merit in the sale.

By far, the greatest accomplishment of Boswell's Books, in my opinion, is Terry Seymour's identification of many of the 436 items sold in the 1893 Auchinleck Sale that were not identified by title in the auction catalogue.  These books were tabulated under the dreadful phrases of and others and and another.  Terry Seymour searched high and low and acquired the contemporary bookseller catalogues of the three biggest buyers of the 1893 Auchinleck Sale: Bernard Quaritch, William Ridler, and Pickering and Chatto.  Using these and other contemporary bookseller catalogues he acquired, he identified many of the and others of the 1893 Auchinleck Sale.

I will reveal here, particularly for those Boswellians and scholars residing in the state of Florida, and for those booklovers who want to know more about the Boswell Library and Boswell's Books, that Terry Seymour will be the guest speaker at the January 15, 2017 meeting of the Florida Bibliophile Society.

Both Boswell's Books and the Boswell Library Thing Catalogue should be required references for university libraries.  Boswell's Books more so because, where possible, Terry Seymour has traced the provenance of the books down to their current location– "if" they are recorded in library databases.  And that is a big IF...

I call to mind Nicholson Baker's article, "Discards," from his book, The Size of Thoughts."  This article, which first appeared in The New Yorker, detailed the initial conversion of library data from library cards to online library catalogues in the 1980s and 1990s.  At most libraries, only the bibliographical information on the front of the library card was transferred.  And when the library card was discarded, the provenance information, if recorded on the verso of the card, disappeared.

Here's the synopsis of Baker's article, which appeared below the title, DISCARDS, in the April 4, 1994 issue of The New Yorker:


America's great libraries are scrapping the card catalogue in favor of the more accessible on-line system, and many librarians are toasting the demise of the dog-eared file card and the bookish image it projects.    But are they destroying their most important––and irreplaceable––contribution to scholarship?

Now in many libraries, Special Collections has either retained or restored provenance information.  But I wonder how many libraries have Boswell books in their library stacks that they no longer know about?