Hubert's Freaks:
The Rare Book Dealer, The Times Square Talker, and the Lost Photos of Diane Arbus
by Gregory Gibson.
Reviewed and Commented Upon by Jerry Morris


One might assume that the sale of the Hubert's material would be as twisted and difficult as the events leading to its discovery.  In actuality, the process by which the archive came to market proceeded in such a straightforward and timely manner that it almost seems out of character with the rest of story (262).

Gregory Gibson 2008:  the first paragraph of the last chapter of the hardback edition of Hubert's Freaks. 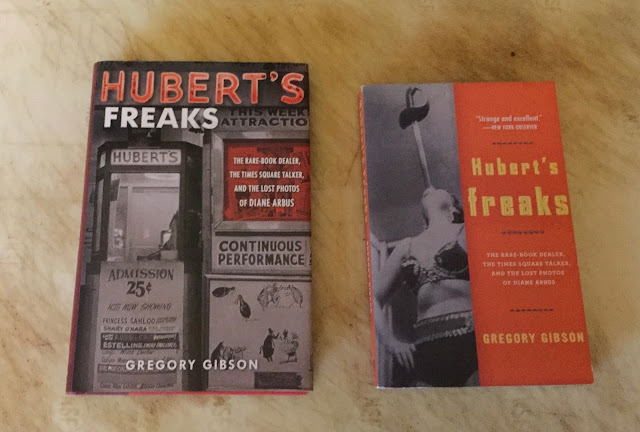 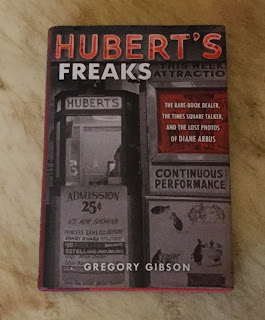 Gregory Gibson uses the words twisted and difficult to describe the events leading to the discovery of the Hubert's archive.  I shall add the word freakish because Hubert's Freaks has a rather freakish beginning.

In the Preface, the author tells us about the out-of-body experience of Bob Langmuir, the main character of the book.  He was ejected from a vehicle on the same day the photographer Diane Arbus slit her wrists while soaking in her bathtub, the first of a number of coincidences.  Throw in a man dressed all in blue and walking on crutches who retrieved a tire for Bob to sit in to ease his pain immediately after the accident, and you have either one freakish introduction–or maybe it was just a mere hallucination on the part of the main character, the bookseller Bob Langmuir.  He didn't remember the details of the accident until years later when he freaked out while hitching a ride from a drunk driver on the Massachusetts Turnpike.  And, mind you, this is just from the Preface!

Gregory Gibson knows how to weave a tale.  He gives us some background on Hubert's Museum and its entertainers.  Then he tells us a little bit about Diane Arbus, emphasizing that everyone pronounced her first name as Deeyan.  Gibson doesn't re-introduce the main character Bob Langmuir until the fifth chapter of the book, which sounds bad, but it's really not because we're only on page 32 of the book.

It was an emotional roller coaster for Bob Langmuir for a while after that: deep depression, a rocky marriage, and nasty, prolonged divorce proceedings.  By page 142 Bob had signed himself into a mental hospital.  Prior to that, Bob had given up antiquarian bookselling and switched to the acquisition and sale of ephemeral material pertaining to African Americana.  Bob had already acquired photos and documents of a Black sideshow from a so-called Nigerian prince named Okie.  Bob's diligent research revealed that the photos were of the freaks of Hubert's Museum.  And the photos were taken by Diane Arbus. Among the documents was a notebook of Charlie, the Times Square talker of Hubert's Museum.  Meanwhile, Gregory Gibson is telling us more about Diane Arbus and her connection with Hubert's Museum, and the world of art.

Gregory Gibson begins Part Two of his book on Page 143, and titles it the New Bob.  By page 156, Bob was out of the hospital and living with friends because his wife had a Protection From Abuse (PFA) order forbidding him to go anywhere near her.  By page 159 Bob is moving in with a woman he met on the internet–not a bad thing at all because Bob and Renee are still together.  And happy about it.  Meanwhile, Bob is told that the Arbus photos need to be authenticated by the Arbus Estate, but the authentication process in no way proceeds in a straightforward and timely manner.

All the while, Bob is searching the web for additional ephemera relating to Arbus and freak shows, and African Americana, and comes across G. T. Boneyard, a Florida dealer who appeared to have the second half of the Hubert's archive, including five vintage photos possibly taken by Diane Arbus.  Bob flew down to Florida and traded a sideshow collection for the material from Hubert's archive.  But it took more than a day because G. T. Boneyard "had to sleep on it" before consenting to the deal.

A whirlwind of action and inaction occurs in the next sixty plus pages, or over two years of real time.  Bob's divorce proceedings dragged on; the judge ruled the Arbus archive to be part of the estate.  The agreed-upon stipulated value of the Arbus archive was $250,000, which was the estimate previously given sight unseen  by Sotheby's.  Bob's wife then fires her third lawyer and her fourth lawyer suggests a settlement that is agreeable to both parties.  And surprisingly, the Arbus archive was not a part of the divorce settlement.  The on-again-off-again dealings for a sale of the Hubert's archive and Diana Arbus photos to the Metropolitan Museum of Art dragged on.  And finally, Steve Turner, an old friend of Bob's, worked out a deal with Philips de Pury and Company to sell the Arbus photos at auction.  The auction was to take place in April 2008.   The experts at Philips de Pury expected the selling price of the photos to exceed a "life-altering sum."  Gregory Gibson didn't think the money would change Bob; "he had already changed."

And that's how the hardback edition of Hubert's Freaks ended...

I wanted to know how much Bob got for the Arbus photos!

I learned from one of Gregory Gibson's blog posts that Bob eventually sold the collection to a major New York institution.  But Gibson didn't state how much Bob got for the photos! So I emailed Gregory Gibson. And that's when I learned that the publication of the hardback edition was timed to coincide with the auction.  Moreover, the paperback edition included an AFTERWORD that contained new information about the sale of the Hubert's archive. 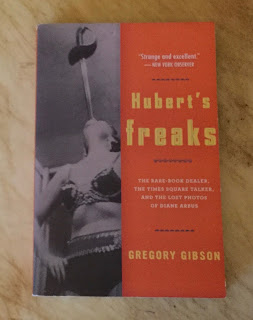 Bob traveled to Manhattan on April 7, 2008, with a light heart and high hopes, fully expecting to come home a millionaire.  He woke on April 8 to learn that Philips de Pury & Company had canceled the auction of the Hubert's archive overnight and without warning (265).

Gregory Gibson 2009 The first paragraph of the AFTERWORD in the paperback edition.


By no means did the process by which the Hubert's archive came to market proceed in the straightforward and timely manner as expressed by Gregory Gibson in the first paragraph of the last chapter of the hardback edition of Hubert's Freaks.  And Bob Langmuir's old friend Steve Turner was partly to blame.

Steve Turner scored a publicity coup of sorts, getting the New York Times to write a detailed story about Bob Langmuir's discovery of the Hubert's archive and the Arbus photos.  Gibson's upcoming book, Hubert's Freaks, was mentioned in the article, as was the Philips de Pury auction itself, scheduled for April 8, 2008.  But the New York Times article was published on November 22, 2007.  In the AFTERWORD of the paperback edition, Gregory Gibson stated that the article "had come out far too early... Gibson's publishers groaned... Events proved them correct, but that wasn't the worst of it."

One of the people who read the New York Times article was Bayo Ogunsanya, the Nigerian prince called "Okie" in Gibson's book.  A March 6, 2008 story in the New York Daily News depicted how Okie was "tricked" into selling the Diane Arbus photos for $3500, even though Bob Langmuir  knew they were worth much more.  Okie filed a lawsuit to stop the sale of the Hubert's archive.

When Philips de Pury cancelled the auction, they claimed that a buyer for the entire archive had come forward.  But most people believed that Okie's lawsuit had something to do with the cancellation of the auction.  Gregory Gibson, however, thought otherwise, and expressed as much in his AFTERWORD.

Gibson believed that Philips de Pury cancelled the auction because they realized the auction was too much of a monetary risk.  The day before the Philip's auction was to be conducted, Sotheby's conducted the sale of the Quillan collection of nineteenth and twentieth century images, bringing $9 million in sales.  Moreover, Christie's had two sales coming up a few days after the scheduled Philips auction, one of which included a collection of 50 Arbus photos. Philips de Pury realized that their timing was poor and that they couldn't compete with the two major auction houses, so they cancelled their auction.  Probably a wise move: the sales of the two Christie's auctions totaled $5.5 million.

There is an epilogue to this story, revealed to me by both Gregory Gibson and Bob Langmuir.  Okie's lawsuit was settled out of court in March 2009.  And the New York Public Library bought the Hubert's archive for an undisclosed amount of money.  But between settling Okie's lawsuit and paying all the lawyer fees, Bob got nothing but heartache from the sale of the Hubert's archives.

There is, however, a happy ending to the story.

During all the trials and tribulations of the Hubert's archives dealings, Bob pressed on and continued to acquire African Americana.  And in July 2009 he sold the Robert Langmuir African American Photograph Collection to Emory University for a life-altering sum.

You can browse the photographs of the collection via the Emory Digital Gallery.

At the time of this blog post writing, The Atlanta Black Star  still carries Rosalind Bentley's eloquent article about the Robert Langmuir African American Photograph Collection.  The article first appeared in the Atlanta Journal-Constitution the day before on July 8, 2012.

And on his Bookman's Log blog on July 16, 2012 Gregory Gibson posted "Extreme Book Selling," a post which recaps Bob Langmuir's meticulous research of the Hubert's archives, and congratulates him on the sale of the Robert Langmuir African American Photograph Collection to Emory University.

And Bob is building a new archive...

Wow. Never a dull moment in Bob's life, it would seem. Glad he finally realized some gains after all that! Great review.