What Happened to Me:
My Life with Books, Research Libraries, and Performing Arts
by David H. Stam, Reviewed by Jerry Morris 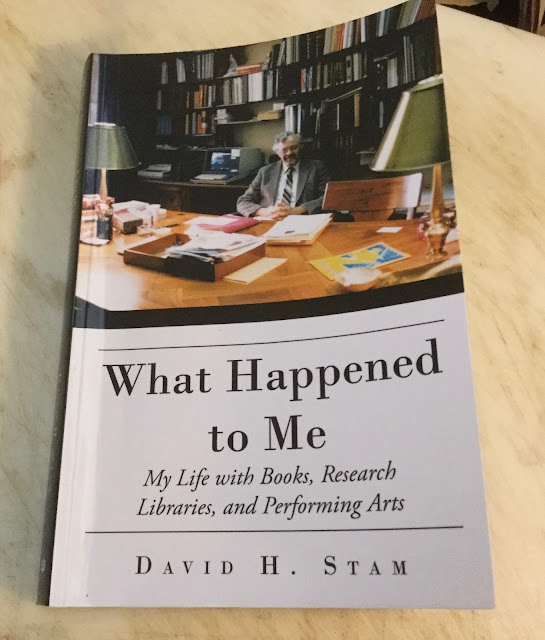 "As is the wont of many old farts in retirement, I was reminiscing..."

These are the author's words, not mine!

David H. Stam wrote those words in his Epilogue, "The Origins of this Screed." And in the very first paragraph of his Preface, Stam suggests that we go to this Epilogue near the back of the book "for more direct stimuli on the origins of these autobiographical memories."   Now I am neither a slow reader or a speed reader, but that is the shortest time I ever got to Page 285 of any book!

In his Epilogue, David H. Stam was reminiscing to a friend about some events in his career when said friend suggested he write about his experiences.  That was in 1998 – And in Beijing, of all places.  It would take another ten years at least, and the urgings of a few more friends before Stam decided to write about his experiences.  And he had a lot to write about; not only about himself, but about the many friends he met along the way in his many years of librarianship.

Here is where I, myself, diverted a bit.  Instead of returning to the Preface, I proceeded from the Epilogue to Stam's Index – I sometimes browse the index of a book before reading it.  When browsing Stam's Index, I recognized a number of names.  His Index is a veritable Who's Who in the Library, Literary, and Book Arts Worlds.

David H. Stam  devotes the first fifty-nine pages of his book to his family, his childhood, his schooling, and his two-year stint in the U. S. Navy as a journalist. As a child at his local library, Stam "resolved to read the entire library collection, starting with Dewey 001."  And by his high school years, he fancied himself to be, in Coleridge's terms, a library cormorant: a voracious reader.  Stam's career working with libraries actually began while he was still in the Navy.  While his ship, the USS Galveston was being converted to a modern missile cruiser, Stam was put in charge of the ship's library of 3,000 volumes of books.

Although the majority of his book pertains to matters of librarianship–and rightly so– Stam devotes a few pages to his life as a book collector (Yay!)  and happens to mention his Polar Exploration Collection and his Leigh Hunt Collection. Moreover, Stam is a member of the Grolier Glub, and mentions the club no less than twelve times in his Index.  And Stam and his wife Deirdre have enjoyed a long companionship with their friend, Terry Belanger, founder of the Rare Book School, and Stam reminisces about their friendship in his book as well.

What I appreciated most about David H. Stam's book, however, was his positioning of his footnotes on the pages they referred to, instead of at the back of the book, a sore point of mine.  I would rather have the reference sources of the footnotes of related information readily available than have to flip to the back of the book and search for the references.  And Lord help me if I wait until I finish reading the book before referring to the footnotes!  I wouldn't remember what the footnotes were referring to in the first place!  There!  Rant over!

A surprising number of the references that Stam's footnotes referred to are available for reading online.  Some of them require login access: eg:  The Library of the Bibliographical Society, of which I am a member:

Other footnote references are available via Haithi Trust. eg: Bulletin of the NYPL Summer 1974: 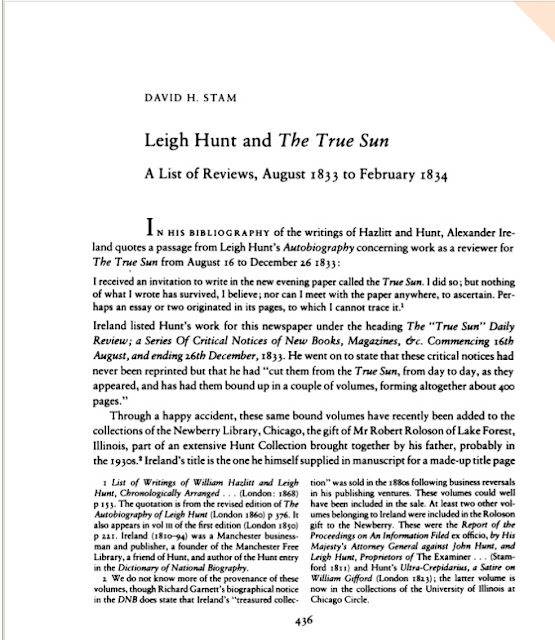 Still other footnotes are available via JSTOR. eg: 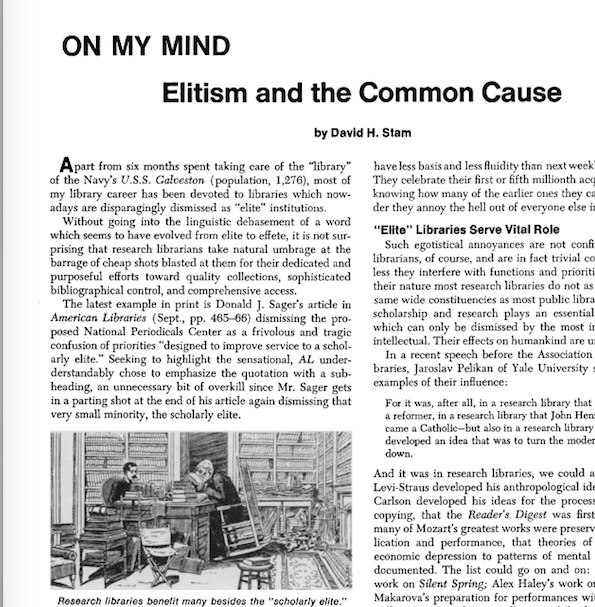 I should mention that my copy of What Happened to Me... came from the author himself. 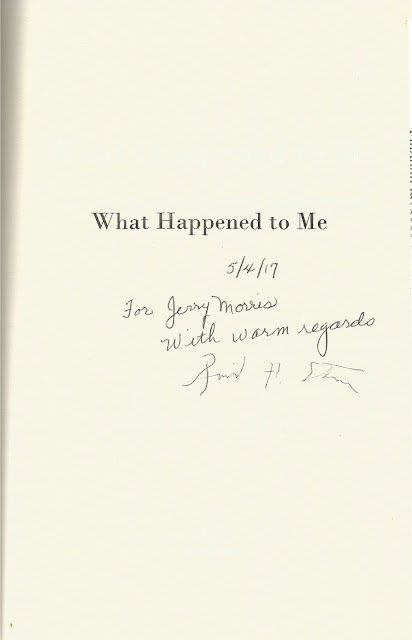 Being a Leigh Hunt collector, David noticed my April 27, 2017 post to My Sentimental Library blog, Leigh Hunt & Two Leigh Hunt Collectors: Joseph T. Fields & Luther A. Brewer, on the web, enjoyed reading it, and wrote to tell me about his own Leigh Hunt Collection.  And what a collection it is!

Finally, David's selected publications are listed in Appendix II of his book.  I have made use of this list to read his online articles and to acquire copies of available Leigh-Hunt-related publications.  Now, it seems, I am starting a Leigh Hunt sub-collection: books containing articles by David H. Stam about Leigh Hunt!